Iowa State compares favorably to the nation because of the academic successes of its women undergraduates. The four-year graduation rate for women in the 2014 cohort was 60%, compared to 41% for the men or a 19-point gender gap.

The gender disparity in graduation rates is even more apparent when broken down by race. The only racial/ethnic group where men have a higher five-year graduation rate is among African American students, which has a 14-point gap between men and women. 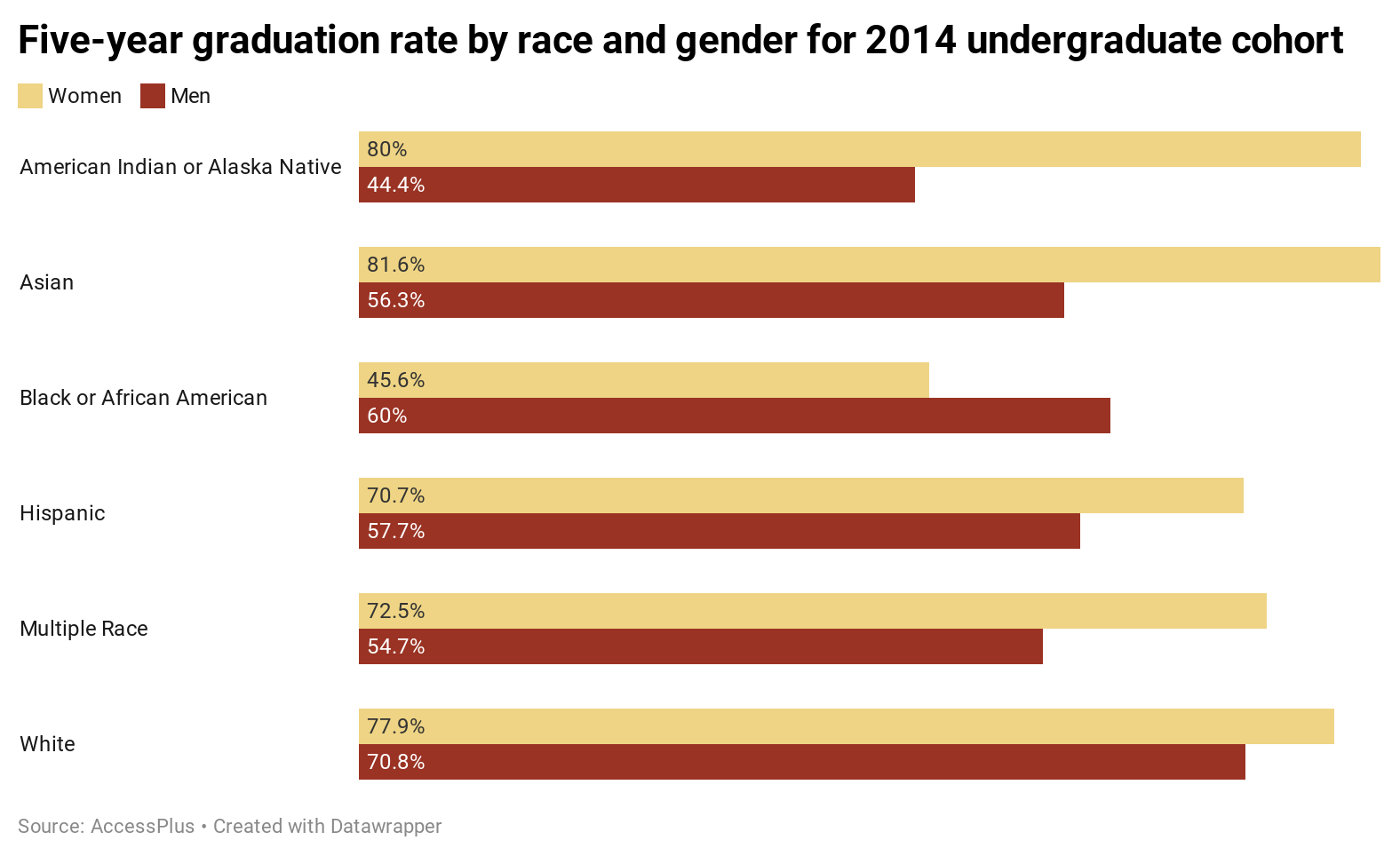 Iowa State is predominantly white, but women of color are contributing to increasing diversity

Iowa State's student body remains predominantly white. In 2010, 80% of the undergraduate student body identified as white compared to 75% in 2018. International students and students of color thus increased from 20% of the student body to 25%.

Much of the increasing diversity of the undergraduate population is due to rising enrollments of women of color. The largest percentage growth was in Hispanic women (48.5% increase), African American women (48% increase), and multi-racial males and Asian women (40.6% increase each).

Women are more likely to graduate with debt

Women undergraduate students are more likely to graduate with debt than their male classmates, although their debt burden is slightly lower. This mirrors national trends, where women enrolled in public, four-year institutions borrowed an average of $29,611 in 2020.

According to the AAUW, women account for about two-thirds of the nation's outstanding student loan debt, with African American and Hispanic women carrying higher debt burdens than white and Asian women. Because of the gender and race wage gaps and choice of professions, women also take longer to pay off their debt, and for Hispanic and white women, experience a higher likelihood of default.

Women are more likely to vote

Since 2012, when data were first analyzed, women students are more likely to vote in national elections than are male students, although the magnitude of this difference varies. The largest gender gap in voting was in 2016, when women’s turnout was 8.2% higher than men’s. The smallest was in 2014, when women’s turnout was only 1.4% higher than men’s. Iowa State’s student voter turnout compares favorably to national voter turnout rates for both men and women.

Iowa State University should dedicate itself to recruiting more women students. Women are underrepresented on campus, compared to national enrollment patterns. Moreover, given women’s higher retention and graduation rates, recruiting more women will have a positive impact on these other important measures of student success.

We applaud the University’s success in increasing the diversity of its student body, especially in the growth of Hispanic students. There is much room for improvement, both in terms of recruitment and graduation rates. There are significant gender and racial gaps in graduation rates. The University should discover and address the reasons for these differences and address them as an institutional priority.

Judicious use of scholarship funds

Finally, we recommend that Iowa State use whatever scholarships are at its disposal to target women students, including the expansion of women’s athletic programs and raising more scholarships for majors that attract a disproportionate share of women students. This will not only enhance the University’s efforts to recruit more women, but it will also reduce the median student debt burden held by women graduates.

This analysis is drawn from student data publicly available through Access Plus. The statistical analysis, graphs, and interpretation are those of the authors. We are limited by the University’s use of the gender binary, which does not allow for recognition or analysis of gender-nonconforming students, and its use of the Census Bureau’s racial classifications. Thus we use the terms “Hispanic” and “American Indian” because those are the terms used by the Census Bureau. These data also do not include sexual orientation, understanding that LGBTQIA+ students may have experiences not reflected in this analysis.