With over 3,000 staff members, the Professional & Scientific classification is the largest body of employment at Iowa State University. Over half (57.7% in 2019) of P&S staff are women. There is a wide breadth of types of positions, all with varying levels of student interaction, but each staff member uniquely contributes to keeping the university running and a great place to work and live. 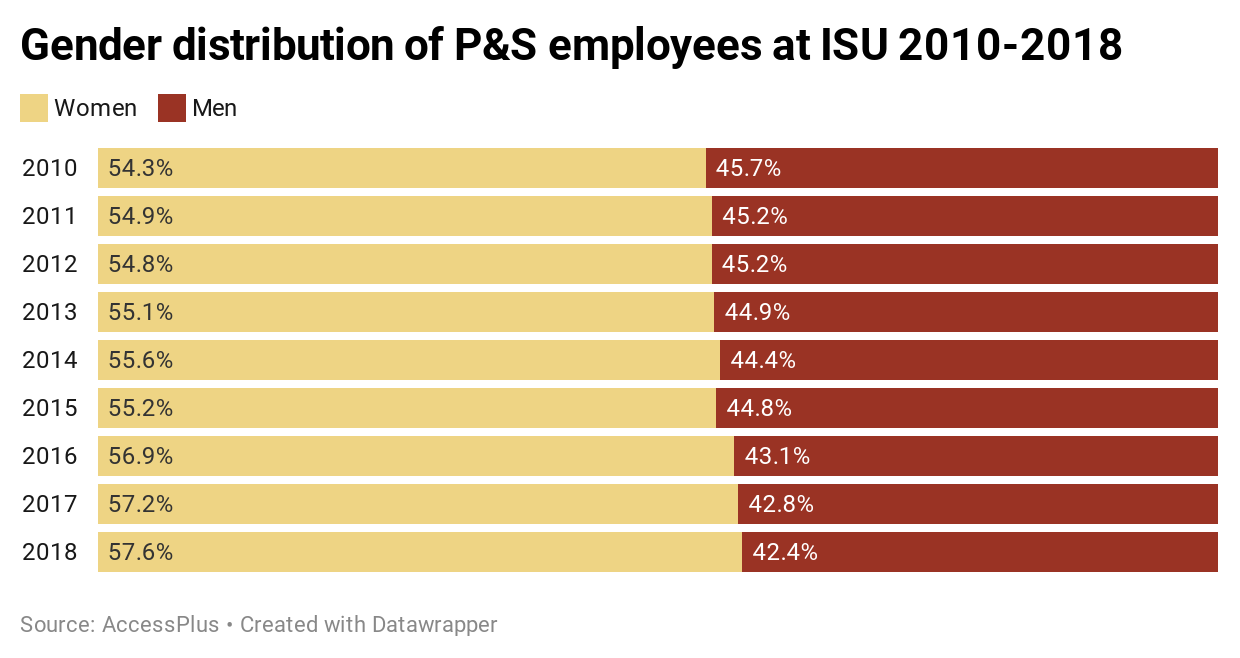 The majority of P&S employees are women, but men are paid more, regardless of race 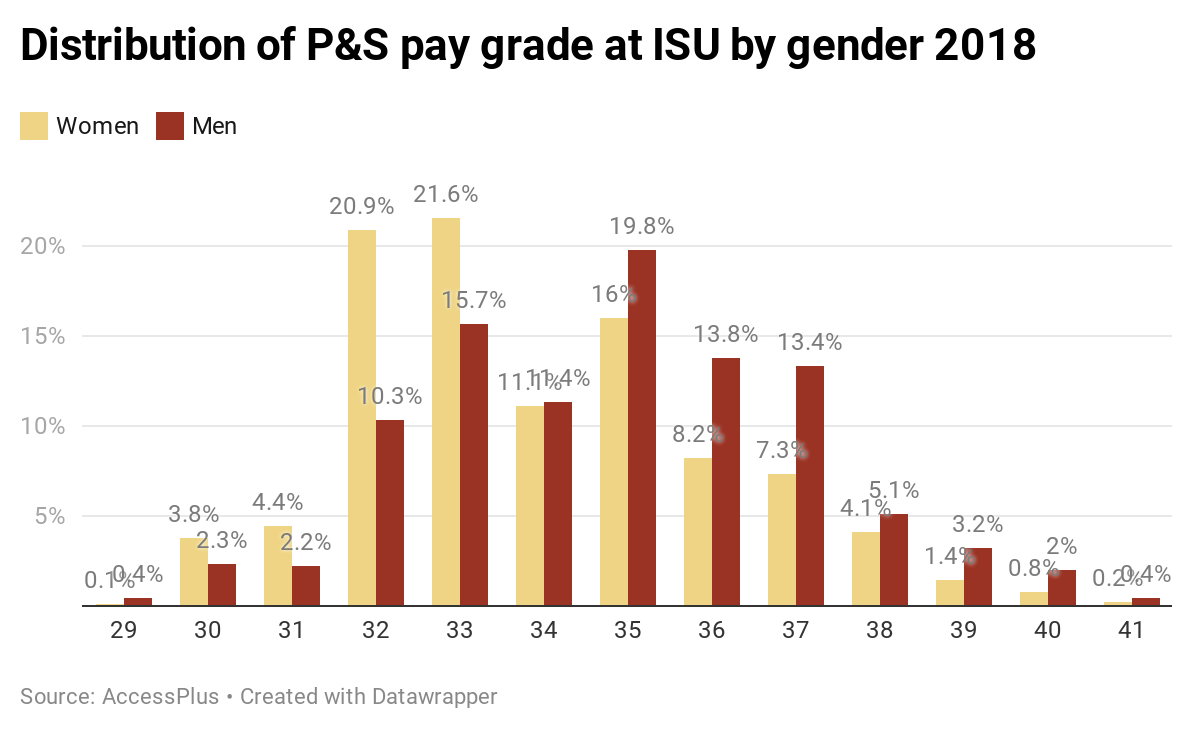 The majority of P&S employees are white

Pay grade is similar across race; men are paid more, regardless of race

We have excluded American Indian/Alaska Native and Native Hawaiian/Pacific Islander from the pay grade analyses due to their low P&S employee numbers. Across the other racial groups, the pay grade distribution in 2018 is similar. From 2010-2018, significantly more Black/African American, Hispanic, and multiple race employees obtained a pay grade ≥37 (+125.0% increase for Black/African American, +166.7% for Hispanic, and +400.0% for multiple race) than white and Asian employees (+31.3% increase for white, +41.9% increase for Asian). These efforts have made pay scale more equal across race than it was in 2010.

In 2018, more men had higher pay grades than women across all races.The gender effect on pay grade is largest for Asian employees (9.9% female versus 32.7% male).

Review gender breakdown with the new classification and compensation system

The Classification and Compensation Review implemented in 2020 was a massive undertaking that resulted in different titles and further refined pay grades intended to align university positions and pay with the external market. The data reviewed in this report uses the previous classification and pay structure, so it will be prudent to reassess this data after a full year in the new classification and compensation system. Our committee encourages University Human Resources to partner with UCAWGE for this analysis.

Conduct an equity study for both classification and compensation

The Classification and Compensation Review did not set out to assess or address inequities in classification and compensation disparities. Our analysis in this report suggests that an equity study is needed to make specific recommendations to advance intersectional gender equity within the P&S employment categorization.

Part-time P&S positions are overwhelmingly female. This in itself does not necessarily indicate an issue that needs addressed; however, as with classification and compensation, further analysis is needed to determine the nature of these positions, their earning and promotion potential, and the satisfaction of part-time employees with their compensation and workload. We recommend conducting a survey of part-time employees to address this need.

Focus on retention of diverse racial and ethnic groups

The data accessible to UCAWGE only reports the current numbers of racial and ethnic groups among the P&S staff; however, through anecdotal conversations with our colleagues and nationwide trends, we recognize that we must focus on retention efforts of people of color, including those issues that are specific to women of color. University administration should continue to work with the City of Ames to make Iowa State University and Ames an attractive place to live in a long-term, sustainable way.

This analysis is drawn from student data publicly available through Access Plus. The statistical analysis, graphs, and interpretation are those of the authors. We are limited by the University’s use of the gender binary, which does not allow for recognition or analysis of gender-nonconforming students, and its use of the Census Bureau’s racial classifications. Thus we use the terms “Hispanic” and “American Indian” because those are the terms used by the Census Bureau. These data also do not include sexual orientation, understanding that LGBTQIA+ staff may have experiences not reflected in this analysis.