Iowa State University employs about 1,300 individuals in the category of merit employees. These men and women represent a diverse array of occupations, including mechanics, groundskeepers, various clerical workers, lab technicians, and agricultural workers. The largest groups are blue-collar and clerical fields. Typically, they are hourly (nonexempt) employees who are governed by a contract negotiated by the American Federation of State, County, and Municipal Employees (AFSME).

Women are a majority of merit employees

Women are disproportionately represented in clerical positions, where 92-95% are women. This finding is all of the more significant because this is a particularly large employment category, comprising 40-60% of all female merit employees at ISU. Since many clerical positions are student- or public-facing, these women are in many respects the “public face” of the University and typically carry out a wide variety of tasks on behalf of their home units.

However, women have made significant inroads in the security and technical employee categories. In the first case, the number of women in security has more than doubled over the decade and increased from a quarter of the University’s security force to a third. Similarly, women have increased from half of the technical category to just over 64% in a ten year period, with a net increase of 14 positions. This increased diversity is a great achievement. 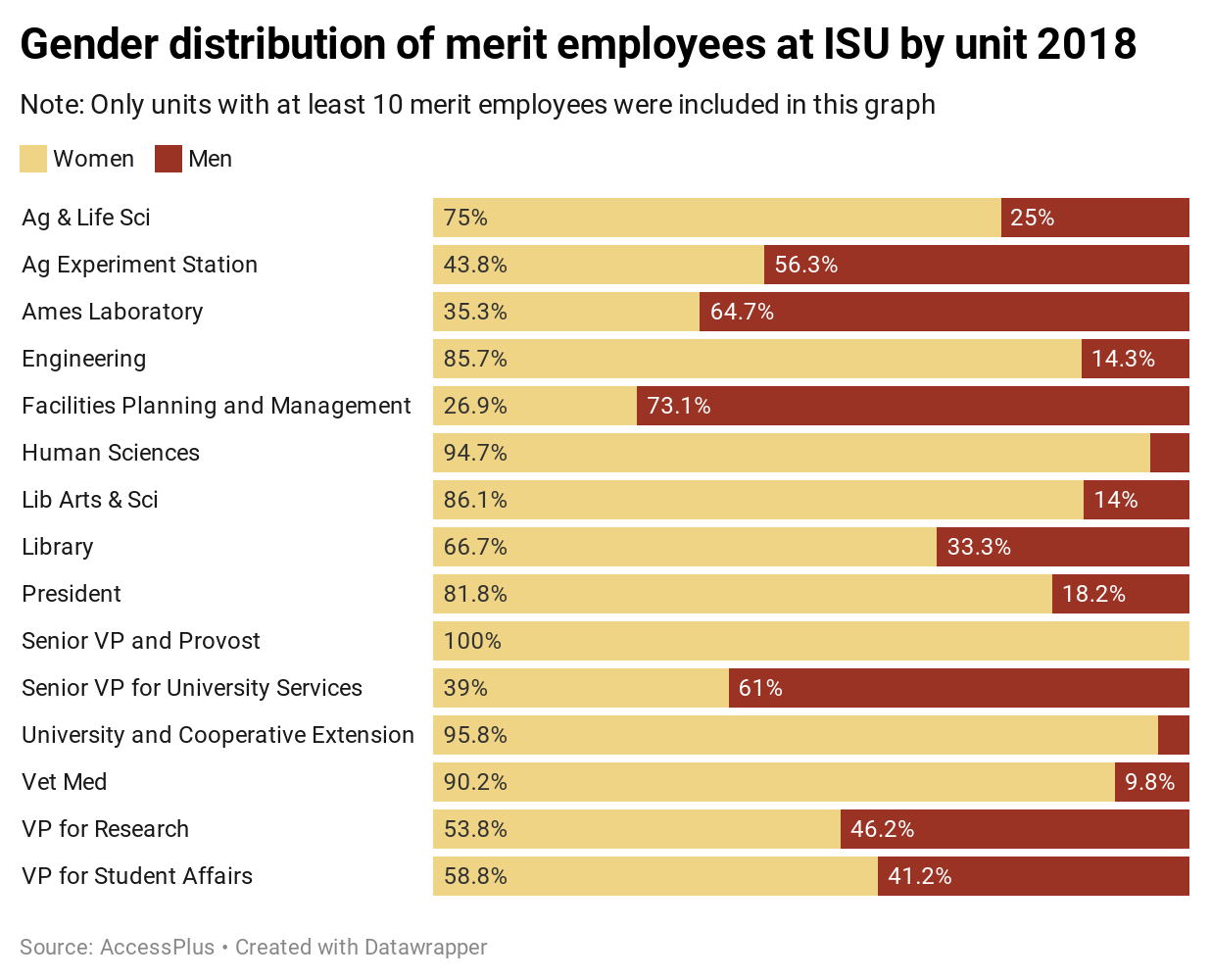 While women comprised 54.9% of merit employees across the university in 2018, they were overrepresented (as a percentage) in all academic colleges, and the Divisions of Finance, Academic Affairs, Extension, IT, Student Affiairs, the President’s Office, and the Library.

This finding shows that even as the University has made strides toward greater gender balance, women in merit positions are not equitably distributed across ISU, demonstrating that the University needs to be intentional about recruiting women into traditionally male-dominated fields found in the merit employee group.

Small progress has been made in racial/ethnic diversity

The merit employee group is overwhelmingly white. However, the percentage of BIPOC (Black, Indigenous, People of Color) merit employees has approximately doubled over the last decade, from less than 5% to approximately 10%. However, numerically, the number has remained fairly constant, other than Latinas, who have experienced a slow but steady increase.

Iowa State University and its constituent units should make intentional efforts to diversify its merit employees to achieve better racial and gender distributions across categories of employees. While its efforts to retain employees of color, including women of color, appear to be successful, its recruitment efforts appear stalled. We especially encourage the University to increase the number of women of color in the clerical ranks.

The university should be mindful of the disproportionate impact of reductions in clerical staff on opportunities for women among merit employees. Clerical staff reductions have decreased the number and percentage of women in the merit ranks and can only be offset by increasing the numbers of women in other fields.

The University should make aggregate salary available by employment category so that analyses by gender within categories and across merit categories is possible.

This analysis is drawn from employee data publicly available through Access Plus. The statistical analysis, graphs, and interpretation are those of the authors. We are limited by the University’s use of the gender binary, which does not allow for recognition or analysis of gender-nonconforming students, and its use of the Census Bureau’s racial classifications. Thus we use the terms “Hispanic” and “American Indian” because those are the terms used by the Census Bureau. These data also do not include sexual orientation, understanding that LGBTQIA+ employees may have experiences not reflected in this analysis.