With over 5,000 graduate and professional students at Iowa State University, nearly half of them women, this second-largest population at the University has a unique story to tell. In many ways, graduate students experience a hybrid of both the student and staff experience as they navigate through their time at Iowa State.

Nationally, women are a majority of students enrolled in post-baccalaureate programs. Women were 60% of all students enrolled in Master’s, Ph.D., and professional programs in 2018. Women have also earned a majority of Master’s degrees since 1981-82; in 2017-18, women earned 58.4% of all Master’s degrees. Women also earned a majority of Ph.D. degrees starting in 2005-2006, and in 2018, earned 53% of all Ph.D.s conferred in the United States. This section takes a deep dive into graduate student enrollments at Iowa State University.

Iowa State’s first year retention rate for graduate students is quite high, over 85% for both women and men. However, from 2015-2018, women’s retention rates were consistently higher than men’s, or approximately 89% for women and about 86% for men.

Ph.D. program enrollment remained steady from 2010 to 2018, with between 2100 and 2400 students enrolled. Women are also underrepresented among Ph.D. stude

During the same period, Ph.D. students of color increased from about 10% to 15%, with the largest increase coming among women of color, with multiracial and Hispanic women making measurable gains. 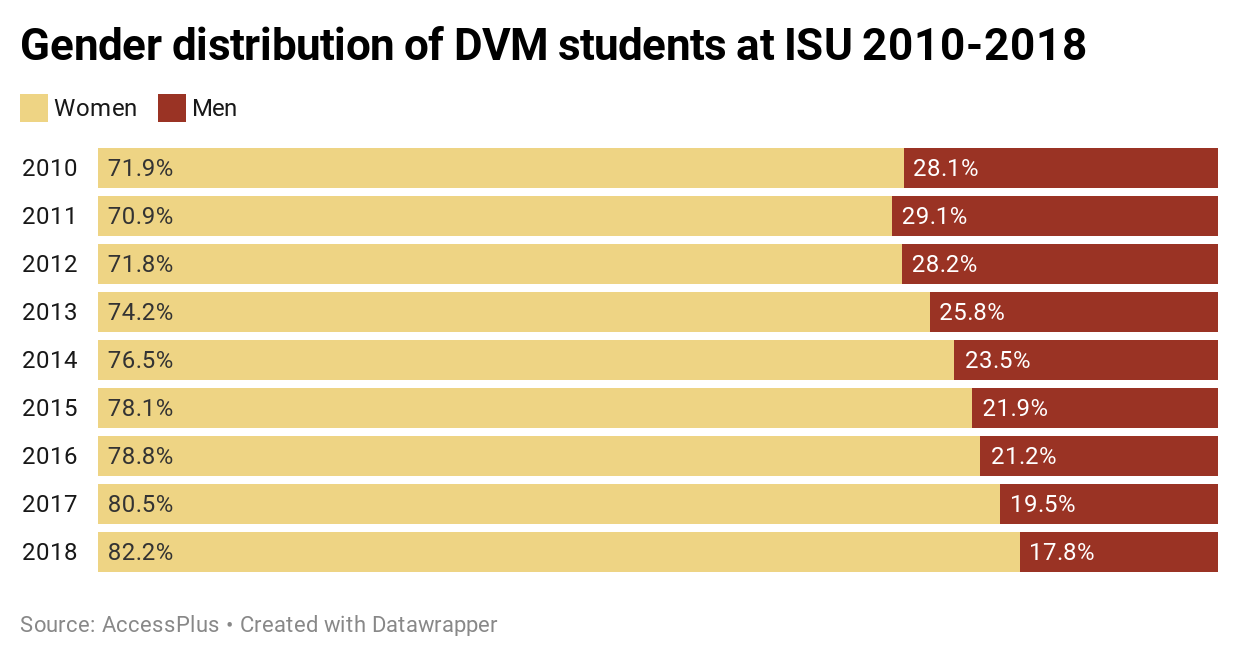 Women enrollment in non-degree programs has increased since 2010

Recruitment of graduate students is a growing challenge during a period of declining enrollments. Recognizing that women are a majority of graduate students nationwide, we recommend that Iowa State invest in graduate and professional programs that are likely to appeal to women. This can include certificate programs and other micro-credentials, such as “badges” or concentrations. In addition, expansion of interdisciplinary programs, and those in the human sciences are likely to attract more women students as well.

Increase the pipeline of women in STEM

Engineering and the sciences are particularly strong programs at Iowa State and these graduate programs suffer from a lack of women, especially women of color, in the degree pipeline. Programs like WISE are helpful to improving retention and graduation rates of women in these male-dominated fields. However, there also needs to be intentional investment in undergraduate research and mentorship to encourage women to pursue graduate degrees in STEM fields especially.

These analyses are derived from data available on Access Plus and analyzed by the Status Committee. These data do not include analysis of retention rates, which is clearly an important variable to examine. This analysis also does not examine the size of student assistantship awards by program or by sex, which is an important means to recruit high-performing students in any field. Similarly, we were not able to compare student loan burdens by sex for graduate students. Access Plus classifies students using the gender binary and uses Census Bureau classifications for race.