Administration at institutions of higher education are responsible for making key strategic, programmatic, and policy decisions that impact culture, recruitment and retention at the university. Though Iowa State now has a woman president, women are underrepresented in key roles and face a significant gender gap in salary. Women’s representation in administrative ranks at Iowa State University is on par with their representation in the faculty (37.8% vs 39% in 2018).

Iowa State has a woman president 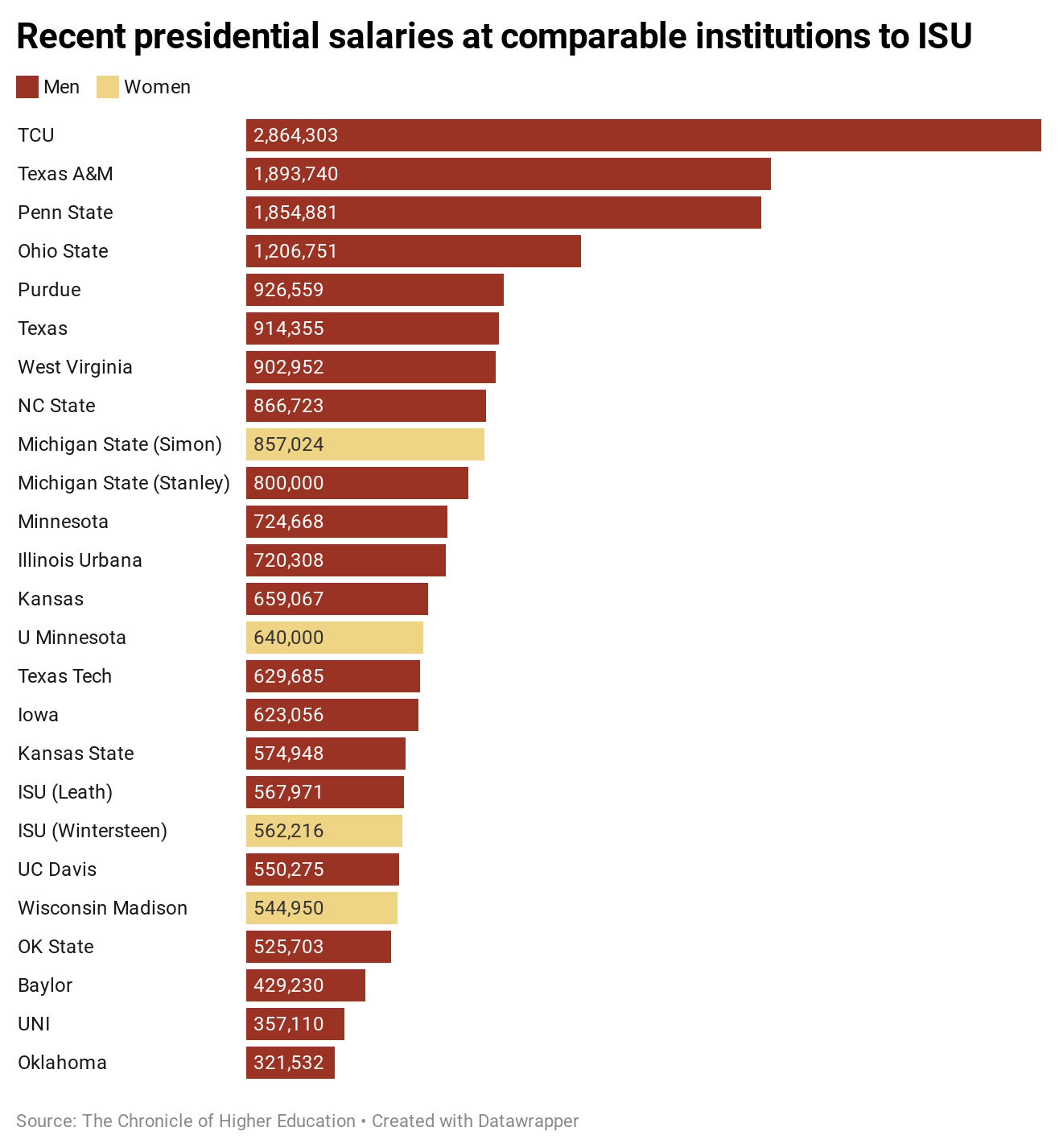 President Wendy Wintersteen became Iowa State University’s 16th President, and first woman president, in 2017. We applaud the Board of Regents for this historic decision and congratulate President Wintersteen on breaking this glass ceiling.

More men are employed in administrative roles; women are underrepresented in key roles

Furthermore, there are several administrative positions where women are sorely underrepresented. For example, men comprise an outsized majority of Head Coaches (84.6% male), Department Chair (77% male) and Director (58% male). By contrast, women are well represented in the ranks of Dean, Vice President, and President. Ag & Life Sciences (86.5% male), Academic Affairs (78.6%), Vet Med (75.0%), Athletics (69.0%), and Engineering (68.0%) have the most lopsided gender ratios.

This trend remains when breaking down salary by administrative unit or office of the administrator. Almost all departments and offices pay male administrators more than women, with Athletics and Extension and Outreach having statistically significant differences. 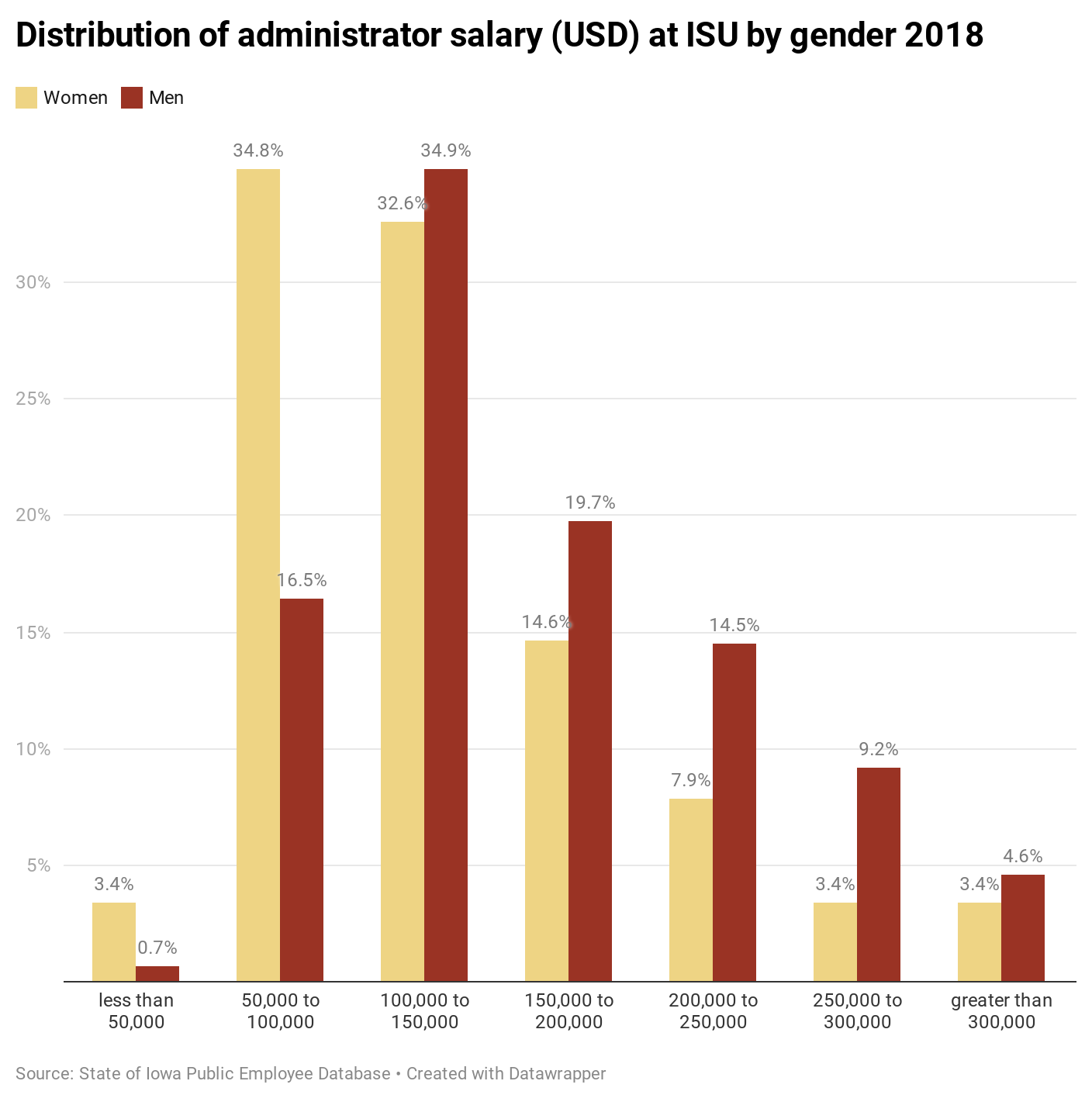 The University should conduct a salary study for administrators comparable to the one underway for Professional and Scientific staff and ameliorate gender gaps within titles and academic units.

The University should continue its intentional Diversity and Inclusion efforts with special attention in those fields and positions where women are most underrepresented.

Minimize the use of “interim” titles to the greatest degree possible and strive to ensure that men are proportionately represented in interim positions when it is necessary to make such an appointment.

The University Administrators databased was compiled from public records. The first source was the Administrative Officers list available on the Provost’s web site (https://www.provost.iastate.edu/administrator-resources/administrative-…). Since this list is heavily academic affairs-oriented, additional leaders with the titles of “Director” or “Executive Director” were identified by searching the organizational charts for Student Affairs, Operations and Finance, and Extension. Administrative leaders in the Athletics Department were identified by the titles Senior Associate, Associate, and Assistant Athletic Director; Director;General Manager; Superintendent; or Head Coach. Duplicate entries and those in Interim appointments are noted. Salary data are taken from the Des Moines Register public employee salary database and date from FY 2018. Base salaries were used. The Register database also classifies each employee by sex, using the gender binary (male/female). These data were used to code the sex of each administrator.

Compensation does not include travel funds, bonuses, or ISU foundation supplements. Since the list of administrators is from the 2019-2020 academic year, and the salaries date from Fiscal Year 2018, the salaries may not include raises, promotions, or other changes in status between FY 2018 and FY2020. Individuals hired from outside the University after 2018 do not appear in the Register database and thus are coded as missing data. These data also do not account for differences in education, experience, qualifications, duration in the position, discipline, or performance evaluations, all of which are factors in determining salaries.